Our latest journalistic write up

In Florence, Italy there are a few magazines where it's very good to be published. One of the best known is The Florentine. They just published a beautifully designed article on Tuscany Plein Air in their latest edition.

Here's the link. It's worth having a look.

http://www.theflorentine.net/articles/article-view.asp?issuetocId=10204&browse-by=The-Arts&level=Tuscany-Beyond#.VbZwcLeBkBE.facebook
Posted by Unknown at 07:39 No comments:

Next week, Tuscany Plein Air will announce a list of finalists in the scholarship application process. Sharing links to their facebook pages or websites and try to promote them. One person from among them will attend this years workshops.

We're looking forward to 2016 when we will be able to offer more opportunities to budding Plein Air artists.

A group of Italian painters called, 'The Macchiaioli' were active in Tuscany in the late 1800s and early 1900s and they are among the true precursors to plein air painting.

They broke with the conventions then taught by the Italian academies of art and did much of their painting outdoors.

To the right is a painting by Telemaco Signorini depicting what is now the glamorous Piazza della Repubblica in the center of Florence.

They preceeded the French Impressionists, and for this reason, are sometimes (erroneously) called the Italian impressionists.  Although both movements were dissatisfied with art as taught by academies (desiring to leave neoclassicism), they have little else in common.

The Macchiaioli sought to invigorate the Italian painting mode of their era by emulating the bold tonal structure of the great masters such as Rembrandt, Caravaggio and Tintoretto.  Although some of the Macchiaioli admired the French Barbizon School, they did not embrace the Impressionist approach of dividing the palette into color spectrums, painting blue shadows and prioritizing color over depicting form.  In other words, the Impressionists were fascinated with pure color and optic effects, whereas the Macchiaioli retained an emphasis on rendering form in the tradition of the great masters.

The Macchiaioli were also very political and embedded in the social issues of their day, some even fighting along with Garibaldi on behalf of the Risorgimento and its ideals.  As such their work is represents an historic bookmark, addressing social issues and the hardships faced by Italians of the times.  Many died in poverty and obscurity, as their art was often not well received by those who collected but there is also the matter of the great collectors who represented and traded artists works.

In France the innovative art dealer Paul Durand-Ruel (1831-1922) was responsible for much of the success of Impressionism and he is famously remembered now as a result.

Many Impressionists also came from economically privileged backgrounds (often painting the privileged society) and could well afford to depart from the artistic conventions of the academy system.
In Italy the Macchiaioli champion was Diego Martelli (1839–96) the critic and art collector who also the groups theorist. At the time, the art world was harsh in the assessment of their art, sometimes ridiculing their brushwork as scrubby, sometimes derisively calling their technique “macchia,” meaning spotty or worse.

Opinions have come full circle and these artists are well recognized in Italy but only beginning to be known in other countries.  Indeed it is difficult to find a good book in English about them.

Nevertheless, today the techniques and the subjects of the Macchiaioli resonate well with modern landscape painting ideals.  They painted small sketches outdoors for later use in studio pieces.  They understood the rendering of form and composing paintings through a value structure and they are among the true predecessors of modern landscape painting. 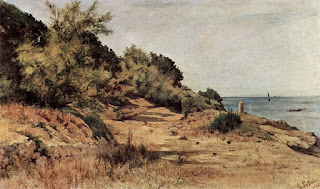 We are pleased to announce that the deadline for the scholarship to our September workshop in Tuscany, Italy, has been extended to July 20th.

Accommodation in the villa from the 12th - 20th of September.
Food during their stay.
Access to all the workshops.
A travel stipend.

More information on the scholarship can be found here.
http://tuscanypleinair.com/scholarship.html

Please get your application in as soon as possible to allow for processing.


During the Tuscany Plein Air workshops one of the topics will be the fabrication of watercolour paints. This is an introduction to the process of making very high quality paints using pure pigments and medium with no fillers.

As long as you choose the best quality pigment this process will produce the very best in watercolours. Long lasting. Free of any danger of mold or other issues which might arise if a less thorough process were used. You can create pans of paint to your own specifications and size and always have the very best at hand in an emergency.