Painting in the crowded streets of Florence

Painting requires a lot of concentration and a certain amount of zen to do well.

So pleinairing among crowds in a busy square goes against the grain for most artists but it's a great exercise and can sometimes be necessary.

I recently joined a couple of other artists doing just that in Florence. We started easy, in the relative quiet of the Boboli gardens at the Isolotto fountain, which features in Dan Browns book, Inferno. It's presence in the novel attracted people who might otherwise not have known of it. The weather was tempestuous with thunder and some light rain but it mostly held off. We discussed the light and established the best view for the subject and began painting.


Visitors to the garden were polite and those few who spoke to us were genuinely interested.

It was an enjoyable day. We were successful in our goals and worked with relatively little distraction.

The next location was Piazza della Signoria, which is a very different environment where you are challenged not just by the fast moving light but by the enormous crowds. The light appears to move faster because you are basically inside a sundial whose shadows are constantly racing. Statues which are brilliantly lit one moment can be obscured within a few minutes and brightly lit spaces can quickly fill with shadow from a pivoting tower or giant statue. 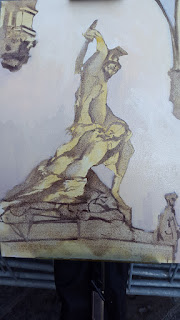 Foolishly, without planning and calculating the movement of the sun, I began a painting of statues in the Loggia. Although beautifully lit when I began, the shadows slowly crept over the forms and all the light was gone before I had completed the drawing. I also allowed myself to become intoxicated by the drawing rather than think strategically about what it was I needed to do, so the drawing took longer and was more detailed than necessary. By the time I was ready to paint, the shady area in which I had placed myself was flooded with so much light that the canvas was blinding. So my subject was suddenly obscured by shadow and my canvas obscured by light. I had to abandon that painting.


Three of us returned the following day and set up our easels. I set up at the mouth of what seemed to be a quiet and unnoticed laneway to the left of the Loggia. Here I prepared to paint the statue of Neptune and the surrounding Piazza. This time I was careful with my light planning and composition.

Working quickly I laid in the shadows, keeping the details to a minimum. There were hoards of people everywhere but my little space was relatively quiet or so I thought.


Every half hour or so a tour guide wishing to evade the other crowds would bring their group through the alleyway and it was necessary to either move the easel or hope that no one would trip over one of the legs.


Mastering the art of finding an island of quiet within the milling crowds  is the goal. There is always one somewhere.