While researching one of my favorite landscape painters, William Turner, I learned a little about the back story of one his seascapes which now resides in the John Paul Getty Museum.

I was studying his painting method when I noticed something odd about the painting and discovered that Turner was also a master of hidden messages.


The scene, like many other great Turner paintings, has few defined details and almost no hard edges. Despite this there is enormous energy and our imaginations are swept up in the impression of waves crashing together. We imagine that we can see the sailors aboard and feel all the ships being battered about.

On closer examination that is true of one ship with a sailor tipping his hat to an audience looking out from other vessels. But the other boats are in calmer waters.

How does Turner create this contradictory visual impression in the same painting and why?

Lines:
Turner uses the patterns of lines very cleverly. The masts, twisting into the sky give the impression that all the near ships are being tossed about on the waves. They point into the sky in opposing directions as though they were on the crests of opposing, clashing waves. The waves in the foreground support that impression by rolling and cresting in dramatic fashion. 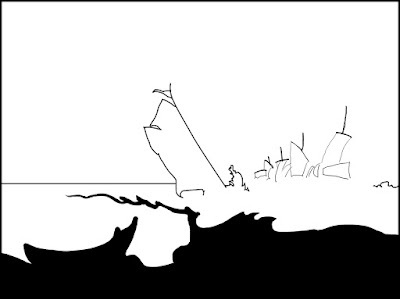 Closer detail:
When we look a little closer, following the view of the sailor we see that his audience are in fact in boats resting in very calm waters. They are also using oars, with no need for sails. So the sails are just for show. Turner has used them like a magician, to give the impression that all boats are in the same waters, together. 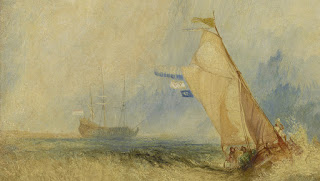 So what could this painting be telling us?
The military gun boat in the distance might offer a hint.

When the back story is known this scene makes some sense and it's clear that the painting contains a message.

The sailor tipping his hat is Admiral Von Tromp whom Turner was an admirer of. Von Tromp was dismissed from the Dutch naval service in 1666 after failing to follow orders. This failure would later prove to be his saving grace.

Quoting the J. P. Getty Museum:
"Van Tromp was reinstated in service and reconciled with his navy superiors in 1673. In perhaps a symbolic overture signaling his submission to authority, Tromp is shown, in Turner's words, "going about to please his Masters."

The warship in the distance suggests a threat of military enforcement and the people viewing from the ships in calmer waters may be his military superiors with the Dutch West Indian shareholders. So the painting, on closer examination is probably a story of political and commercial interests bringing an adventurous spirit to heel.

To learn more about the backstory, which is rippling with intrigue, follow this link & scroll down to the engraving of the St James day Fight. A short overview of the life story of Cornelis Tromp here.

Exploring the Tuscan countryside is always amazing. Even in winter it's incredibly beautiful and full of surprises.

While exploring painting locations I recorded the setting sun in a rather beautiful location within easy walking distance of Florence. The photos below are all taken on the same day with a mobile phone on a tripod and I just thought you might enjoy them as they look more like early autumn, rather than the pinnacle of winter.

Hope you enjoy them. 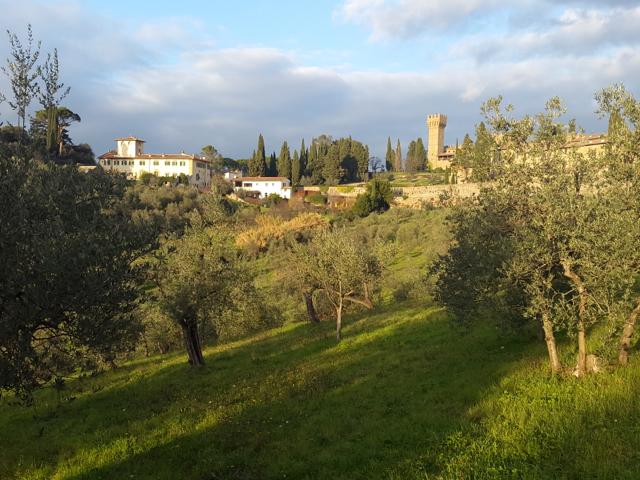 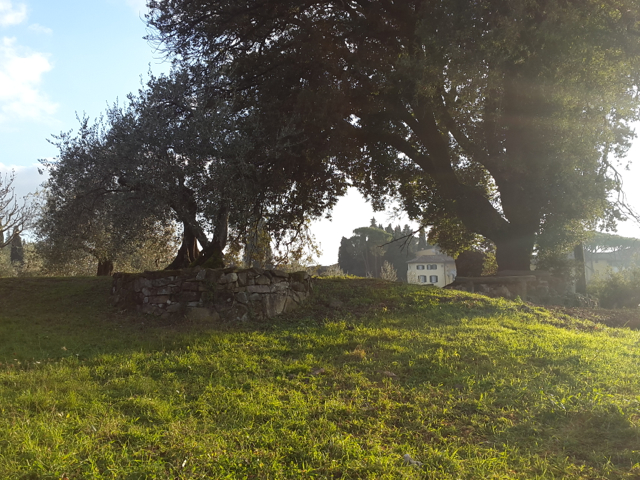 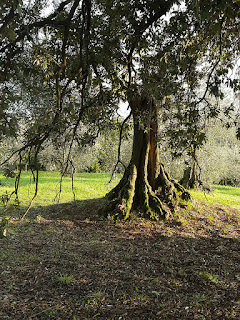 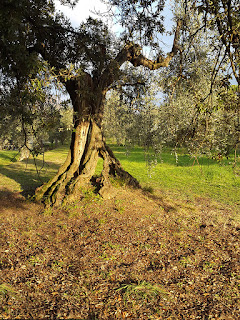 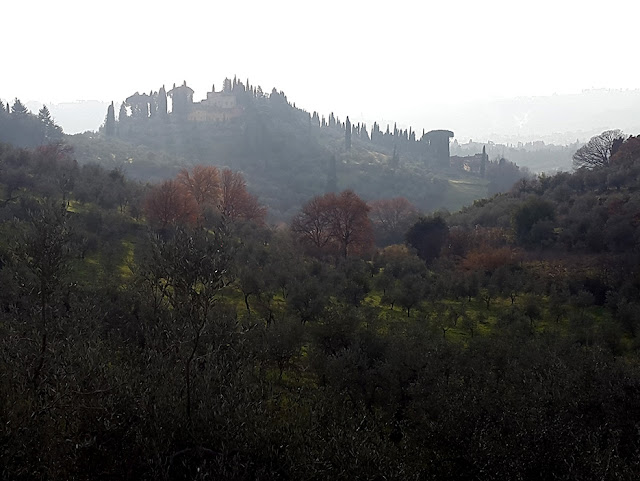 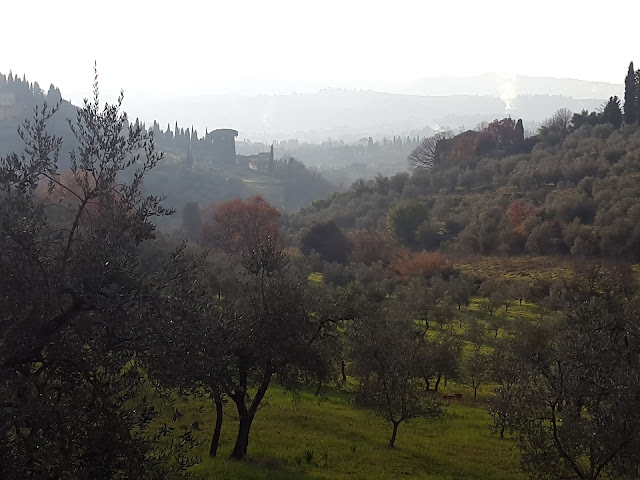 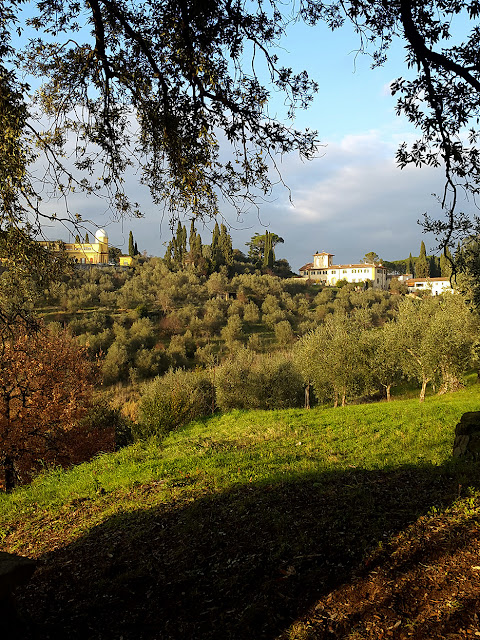 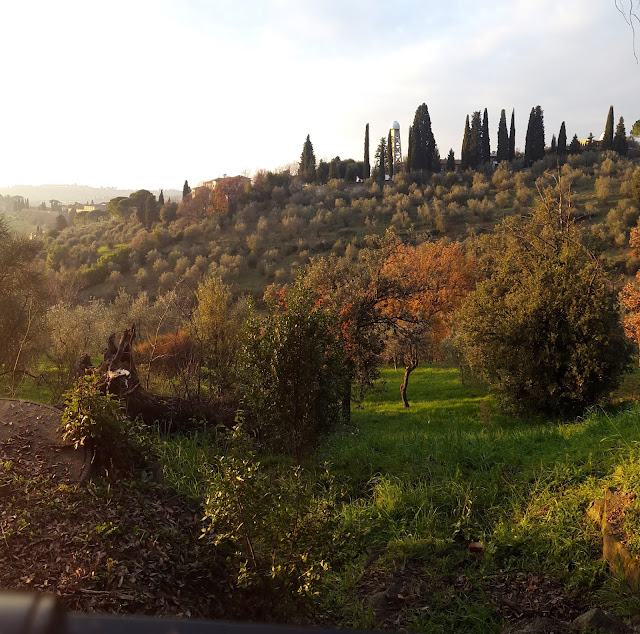 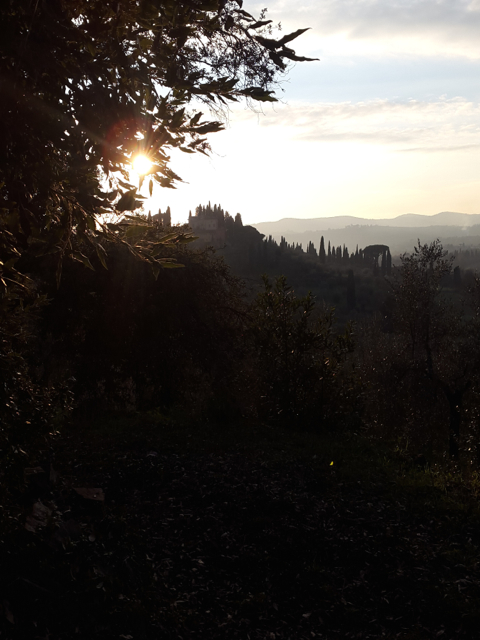