Strategies in Watercolor Painting: A building in the Tuscsan landscape

When you prepare to make a watercolor painting it really helps if you use certain strategies.
Particularly if you have a landscape with a building in it.

Most people would focus on the building first and then paint vegetation around it. That's the direct opposite to what you should do.

In this video you can see how to prepare for a painting in watercolor using an easel and how using vegetation to frame your architectural elements helps enormously when it comes to choosing the values for the buildings. 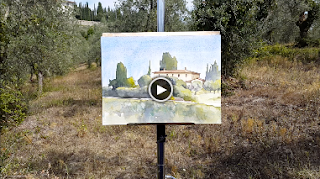 The scene of the San Niccolo tower and the reflected morning light in the Arno is a popular one among artists and students of art, living in Florence. It pops out of the opposite riverbanks trees and is complimented by the remains of a mill at the weir opposite. The calmness in the water created by the weir creates beautiful reflections in the early morning and is best from 9am onwards. A civilized hour for a working artist to begin a painting.

The tower is illuminated while the trees are mostly in shadow and the waters reflections are like a slow moving ripple and are easily captured if the artist can work quickly and reduce them to their essence.

The first thing is to consider the changes in light which each day brings to the scene. Get involved by looking at the intensity of the light, clarity of sky, and strength of shadows. Look for colors in the darks but don’t try to reproduce them. Just be aware of them so that there is a tendency towards the colors in your darks. A hint of red or purple in the shadows can be your guide to the color tendency of the whole scene. Imagine how the scene is going to change by considering the position and direction of the moving sun. Try to animate that in your mind before you begin painting so that you can anticipate changes that are coming.

The painting process isn’t only about recording what’s in front of you. It’s about your response to it and if it doesn’t engage your imagination then the scene will be dull and uninteresting. When an artist feels that they have a connection they don’t worry so much about the details. They simply get into them as a process of painting. Having said that, experience and lots of painting practice help to get past the worry about ‘how’ to capture something that seems very complex and demanding.

So by way of ‘experience’ here are the steps I took in painting this scene.

Consider the scene here and look at it as mostly shadows with clumps of light sticking out. The camera can’t capture the movement of the light or the ever changing reflections in the water, nor the light in the shadows which the naked eye can see. 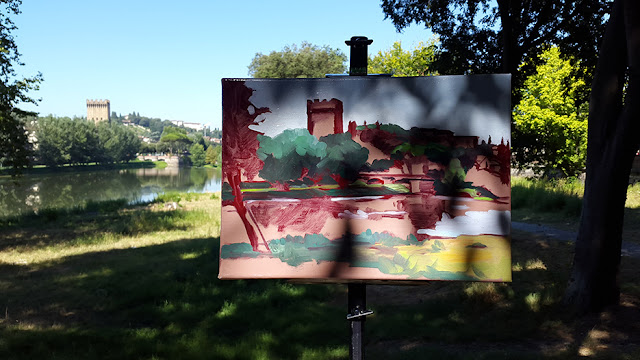 My first step is to mark in the position of the shadows on the canvas which in this case I’ve given a toned ground of pinkish red as the season is beginning to move into autumn. I am using a burnt umber and cad red to paint in the shadows position and will supplement this with other colors later. I don't do a charcoal drawing. Just marks with the brush and erase with another brush loaded with some medium.

The lightest lights are added in the sky and the waters reflections. So with the shadow marked in and the lightest lights the largest blocks of light and dark are indicated, which helps to put the other values in context.

Then I block in the main colors which will influence the impression of the painting. Not worrying about details I focus on the the fall and turn of light and get in at least 3 bands of values in each large form. From the lightest to the middle to the darkest to give a sense of the turn of light on the trees, for instance. These are my notes and help with predicting the position of the light a little ahead of time.

I won’t discuss the composition as I’ve described that in other demonstrations. Although there isn’t a lot of perspective in this painting I’m making the far banks colors a little subdued so that we have a sense of aerial distance.

It’s important to note the intensity and position of the shadows in the main architectural elements at this point. They draw the eye in and will be important later. So make them a little more intense than you might think is wise. 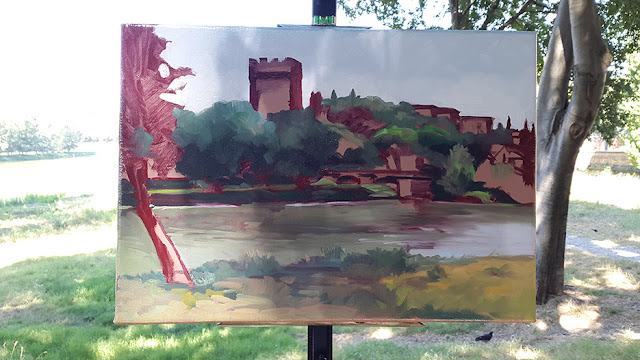 In the sky I’ve used a combination of cobalt, ultra marine, and a tiny bit of red mixed with white to make a greyish blue which moves from darker to lighter at the treeline. I like texture in the sky so am using a white from which I’ve removed a lot of the medium. I’ve painted in a lot of the foreground grass and it’s shadows. In the water I’ve very quickly describing the reflections at the edge of the far bank, the main lights reflected and the sense of movement.

So now you have the sky, the far bank which is mostly shadow, the water and the foreground. 4 bands of value intensity. This is done as quickly as possible without much detail. It’s all creates a frame for the tower and other architectural elements. If I were to paint in the architecture first, the chances are high that I would obsess on the details and not paint the shadows in the context of the nature surrounding it. 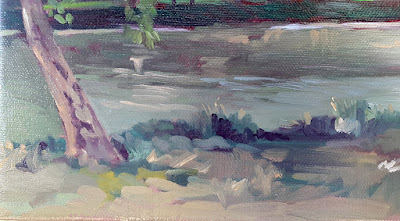 The lights on the edges of the water on the far riverbank are important. They always exist when water meets shadow but don’t always have the same value. 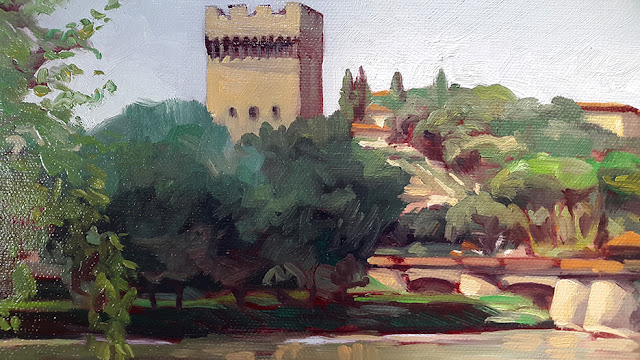 Now that the architecture is framed and the surrounding are in place I can paint the buildings. I have my shadows so only the main light planes remain. On the main face of the tower receiving the early morning light, the fall of light should be considered. Lighter at the top, darker as it descends. In this case I didn’t do that so the face looks a little flat.

However the dark drawing peeks through at the edges which makes this acceptable. I didn’t paint a lot of detail in the shadows on the face of the tower. They are just suggested. Intense shadow moving to lighter. 3 bands of color value are used. The value in the shadow of the tower is painted over the red, which is allowed to show through. In the weir arches and butress’ to the right of the tower we see the fall of light and turn of light as the values go from high to low. I’ve increased the chroma here using the appropriate colors in white to compliment the shadows. If you look into the shadows of the trees you will see a light purple popping out of the dark shadow. This note of color describes the reflected light coming off the water. See the trees on the right over the weir. Under the line of riverbank trees you’ll see that I’ve just dragged a green shadow value over the dark red that was used to describe the position of the shadows under the trees. 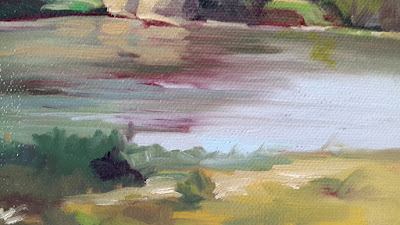 You can see here that the movement of the water is created by simply setting colors down beside each other in abstract forms. There is no attempt to describe ripples. The lights are a variety of intensities and red shows through where it is appropriate. It’s mostly the red which I painted to describe the shadows that we are seeing here. As the eye travels further across the water the more abstract the forms. 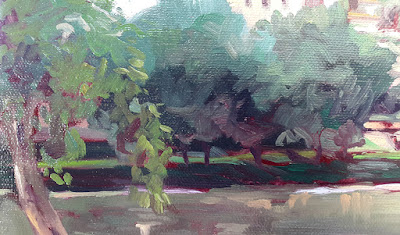 Now that the image context is in place and the architectural values are done I can add some more form and intensity to the shadows and lights. The focus is on values now. Making the forms which have already been described come alive without obsessing over details. If this were a studio painting, this would be called the second painting stage. You can see from the brushstrokes that I’m moving very quickly with the brush and respecting the position of the light without focusing too much on individual elements such as leaves except in the foreground tree which is slightly helps to emphasize the perspective.

In this image you get a better sense of the water and again can see that the red underpainting is peeking through, helping to create the sense of ripples and reflected shadow. Red and green are complimentary colors and one emphasizes the other so the shadows under the trees sing. By adding lights in the most eye catching forms on the far bank I lift the shadows.

This side by side view of the painting and a photo gives a lot of information about the paintings progress. The sharp eyed will notice the photo is taken later in the process because the shadows are longer (sun is higher in the sky). This is why painting in the shadows first is very important. It unifies the painting before you begin to add color. I haven’t labored over detail. Just enjoyed the process of quickly observing everything I’m seeing and recording the vibrancy of light.

The painting gives the impression of realism but doesn’t attempt to record every line or brick and aerial perspective is very strong right here because I wanted to create the sense of trees falling away in the distance behind the weir using lighter values. 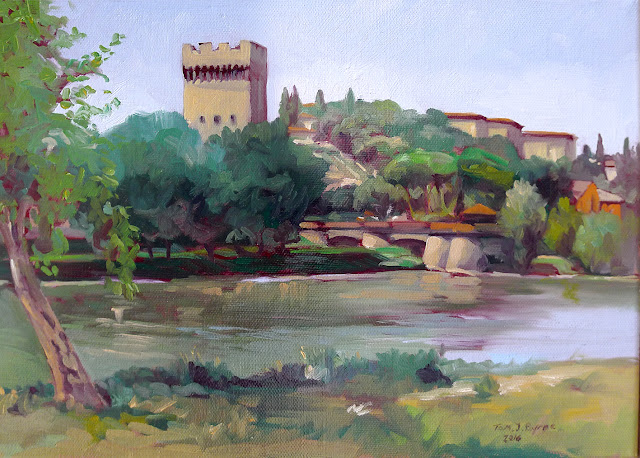 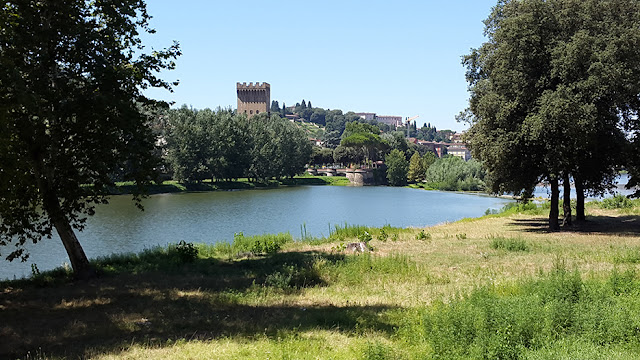